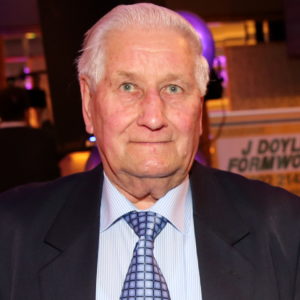 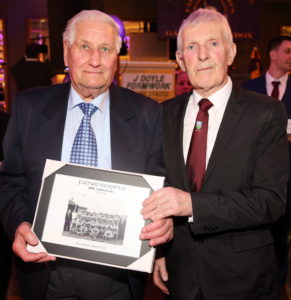 Tom Ryan R.I.P
London Wexford Association regret to announce the passing of Thomas Ryan (Life President of The London Wexford Association) from Donnard, Clonroche, Co Werxford who was residing in Galbally, Curracloe, Co Wexford. Tom is survived by his Wife Nuala sons John and Paul and daughters Marguerite and Fiona and Grandchildren, Sons-in-law and sister Mary and his late brother Jim and late sister Biddy.
He came to London at a very young age of 18 and settled in Cricklewood and later moved on to Forty Road in Wembley.
He set up his own company ‘New Ross Construction’ in the late 50’s which was very successful.
He was a founder member and player of the Father Murphy’s Hurling Club.
He would have been the last founding member and Life President of The London Wexford Association. Tom and Nuala also spent a number of years running the County Hotel in Anne Street in Wexford where they were very popular hosts.
President Michael Sills said ‘ Tom was a great character and was always a pleasure to be in his company once you go out with him you would never know where you would end up. Tom possessed a mountain of knowledge regarding GAA matters. I will miss him and his witty ways’
Tom was a very generous man and would have been always willing to help out when needed. He was extremely well know within the community and will be sorely missed.
Thoughts and prayers go out to all his family and friends.
May his gentle soul Rest In Peace 🙏🏻🙏🏻💜💛