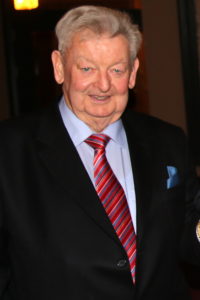 The London Wexford Association regret to announce the passing of Sean Diviney our well known Life President who unexpectedly passed away on Monday the 2nd of April 2018. Sean was a true legend and a popular gentleman known to one and all who hailed from Garrigbyrne, Co Wexford. For many years Sean was the proprietor of the popular The Prince of Wales pub in Willesden Lane, Kilburn where he took over from the Phillips family, Sean and his family have represented the Fr. Murphy’s club on the field and have been long time supporters. Sean and his family spent the weekend at The Riverside Park Hotel in Enniscorthy, Co Wexford in joining in Fr. Murphy’s club 60th anniversary celebrations. He was a great character and a loyal friend to many always renowned to dress in smart attire.
Our thoughts and prayers are with his wife Kathleen and sons Trevor and John, sister Vera and Gran children, Nieces and Nephews, Brothers -in Law Tommy and Michael at this difficult time. He will forever be remembered and sorely missed by all his family and friends. May his gentle Rest In Peace